How does EMDR work?

Most individuals wonder what actually occurs in a typical EMDR session. There are eight phases of treatment and the initial one focuses on taking a thorough client history followed by a preparation stage. In the Rapid Eye Movement portion, the client focuses on a troubling memory and identifies the belief he has about himself connected to this negative memory (for example, in dealing with rape, the person may believe “I am dirty”). The individual then formulates a positive belief that he would like to have about himself (“I am a worthwhile and good person in control of my life.”). All the physical sensations and emotions that accompany the memory are identified. The individual then goes over the memory while focusing on an external stimulus that creates bilateral (side to side) eye movement. This is most often achieved by watching the therapist moving a finger. After each set of bilateral movements, the individual is asked how he feels. This process continues until the memory is no longer disturbing.

The individual is processing the trauma with both hemispheres of the brain stimulated. The chosen positive belief is then installed, via bilateral movement, to replace the negative one. Each session normally lasts for about one hour. It is believed that EMDR works because the “bilateral stimulation” by-passes the area of the brain that has become stuck due to the trauma and is preventing the left side of the brain from self-soothing the right side of the brain.

During this procedure, clients tend to “process” the memory in a way that leads to a peaceful resolution. This often results in increased insight regarding both previously disturbing events and long-held negative thoughts about the self that have grown out of the original traumatic event. For example, an assault victim may come to realize that he was not to blame for what happened, he is now safe, that the event is really over, and, as a result, he can regain a general sense of safety in his world. 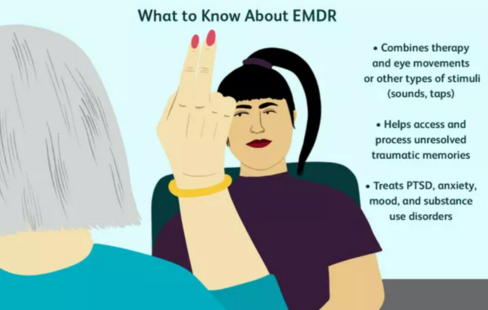